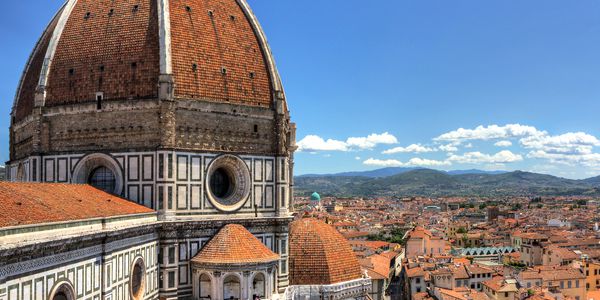 The Florence Dome, the seat of the bishopric, was the third and last Cathedral to be finished in Florence in 1412 and it was given the name Santa Maria del Fiore or "Holy Mary of the Flower".

It was designed at the end of 1296 by Arnolfo di Cambio while the cupola, a symbol of Tuscany and the city of Florence, was created by the renowned Renaissance artist Filippo Brunelleschi. Over the course of the centuries, its finalization came from the work done by a number of artists.

It all began in 1293 when the Republic of Florence obligated the citizens to bequeath a tax for the building of the new and more magnificent Duomo, which was to replace the existing cathedral of Santa Reperata, built on the same site. Arnolfo di Cambio worked on the project for 6 years from 1296 to 1302, the year of his death. After Arnolfo's death, some 30 years later in 1334, Giotto was named to oversee further construction but died shortly after in 1337. During the short time in which Giotto took part in the designing of the magnificent Cathedral, he designed the exquisite bell tower (campanile).

Andrea Pisano, the creator of the south door of the Baptistery, continued up until 1348 the year that the great plague cut the population in half from 90,000 to 45,000.
From 1349 to 1359, the work passed on to Franco Talenti who finally oversaw the completion of the bell tower. In 1366, Talenti also designed a new project that was to replace the original plan by Arnolfo who conceived the Cathedral in Gothic style, which was the trend at the time, building the Basilica with 3 naves that joined the main altar, the two bays and the new façade.

The City of Florence, influenced by the advice of some painters and sculptors, approved a new design, deciding that the Gothic style was to be substituted with Roman architecture. This included an octagonal dome spanning 42 meters to be built at the east end of the central nave that was newly divided into four bays, while the two laterals were made rectangular.

Finally, in 1375, Santa Reparata was completely torn down and the Duomo of Santa Maria del Fiore was ready to be the new cathedral of Florence.

Some remains from Santa Reparata can still be seen today in the archaeological area under the Duomo.

There was a series of both exterior and interior structural and decorative interventions enriching the history of this monument.

He was creating statues for the cathedral when he gradually became more involved in the architecture. He entered a competition with the artist Ghiberti, then he constructed a model of the Dome in brick, and daringly proposed his plan, which was conceived without the integral framework of a wood centering, which up until that time had always been used and thought necessary in any Gothic or Roman construction. The project went forward under his supervision from 1420 to 1436. The lantern, also designed by Brunelleschi was completed later, after his death and the copper sphere, done by Verrocchio, was placed on top in 1472.

The two sacristies were done early in the early 16th century with marble pavements and decorated with sculptures and frescoes by Paolo Uccello, Andrea del Castagno, Giorgio Vasari and Federico Zuccari (the Last Judgement in the cupola).The facade that completed this magnificent work of architecture dates back to 1800. The sculptures that were found on the old façade, some by Arnolfo himself, were dismantled and transferred to the Museum of the Opera inside the Duomo.