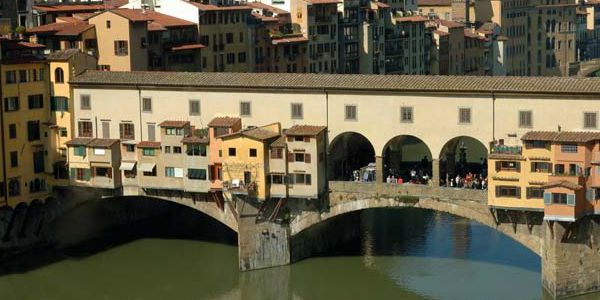 Ponte Vecchio is the oldest bridge in the city, originally built in wood on piers of stone by the Etruscans, it crosses the Arno River at its widest point, at the place where the antique boat for river crossing was found.

It was destroyed in 1117 by a flood and it was rebuilt in stone only to be devastated again in 1332 by another flood. The bridge we see today was built in 1345 by Taddeo Gaddi and Neri di Fioravanti, once again to substitute the ancient Roman bridge that had been destroyed many times by the flooding of the Arno, but this time in stone to secure its solidity.

Due to the enormous amount of pedestrian traffic that crossed over the bridge, the more enterprising merchants decided to set up shops on the bridge itself. The first merchants consisted primarily of blacksmiths, butchers, and tanners catering mostly to travelling soldiers.
Shortly after, the Black Plague in 1348 When half of the population perished, the Medici family moved into Florence bringing their vast wealth and appreciation for the finer things in life with them.

When they acknowledged the use of the Arno by the merchants led to a grave degree of pollution of its waters, they decided to take action by replacing them with goldsmiths and artists and soon the number of shops greatly increased. Eventually between the years of 1565 and 1800 an upper level, as well as a back row of shops, was added and it crosses the bridge and connects the Uffizi Gallery with Palazzo Pitti.

Florence grew rapidly due to this increase of trade not to mention the structure and strength given to the bridge. Ponte Vecchio is the only bridge that survived the perils of WWII; the only bridge saved from bombings by the Germans, who bombed the adjacent surroundings to bar access. It also survived the massive flood of 1966 which wiped out the shops on the bridge but whose roaring waters were not enough to crumble the strength of the bridge itself. A precious demonstration of architecture, as well as history, makes Ponte Vecchio an enchanting site for all those who visit it.