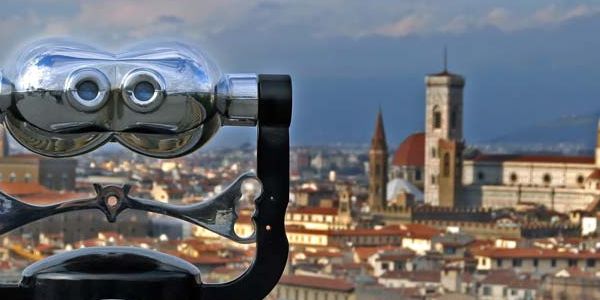 In 1869, when Florence was the capital city of Italy, the Architect Giuseppe Poggi created and designed the route that leads up to the panoramic Piazzale Michelangelo.

The main roads were continued up into the hills while creating squares in and around the remaining ancient Florentine Gates; or at least those saved from destruction, located along the route. These doors or "porte" still remain today. The route up to Piazzale Michelangelo begins from Piazza Poggi at Porta San Niccolò. Two small neo-sixteenth century buildings, built by Poggi, to close off Via San Niccolò, stand beside the original 1324-defense tower of this original entrance gate into the city.

This famous panoramic square, which offers one of the most magnificent city views in the world, is found between Mount San Miniato and the Arno banks and was once a fashionable meeting place for the Upper middle class of the 19th century. From the other side of this square you can see the Fiesole hills to the north, also a spectacular view. In the center of the Piazzale, one can admire the monuments dedicated to Michelangelo, from which the Piazza also gets its name. The four replicas of the allegorical bronze statues depicting Day, Night, Dawn, and Dusk, created for the Medici tombs, are all dominated by Michelangelo's world famous bronze statue of David, a reproduction depicting the original, which is in the Academy Museum.

On the hill behind the sculpture there is a loggia, which was  originally intended to become a museum to hold other masterpieces of Michelangelo, but the idea never came to life and instead it hosts a restaurant and outside café where tourists gather to enjoy the view.

Directly above the Piazza you can find the hill called Monte alle Croci where one can follow up the of stairs from the Piazzale leading you to the Basilica of Saint Miniato built in 1018 on the ancient site of a 4th century chapel. This Florentine Romanesque architecture originally belonged to the Benedictine Monks before passing to the Olivetan Friars in 1373.

The upper part of the Church contains a 12th century mosiac of Christ with the Madonna and Saint Miniato. The 11th century altar preserves the bones of the Saint himself. The center of the main floor is inlaid with marble intarsia of zodiac signs and symbolic animals.
The Church also contains a Crypt from the 13th century and the Chapel of the Crucifix designed by Michelozzo with contributions by Luca della Robbia.
Next to the Church of Saint Miniato, there is the Bishop's Palace built between 1295 and 1320, once the summer residence of the bishops of Florence which later became a convent, hospital, and house of the Jesuits. Piazzale Michelangelo today is a place where tourists gather not only to enjoy a spectacular view of the city but also to enjoy the music, food stands, open air markets and gardens that you can found there.

Piazzale Michelangiolo is the first tourist attraction on Tripadvisor !!! It is located a short distance from Residence Michelangiolo.